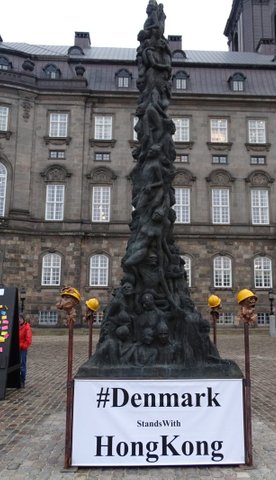 Pillar of Shame by Jens Galschiøt

"The Pillar of Shame" is at the G20 summit in Rome

27 Oct.2021: Latest news from Galschiøt about The pillar of Shame sculpture

Google translated into English from chinese:

The sculpture took part in an activist action in front of the Chinese embassy in Rome.

A group of activists has driven the 3 meter high copper model of "The Pillar of Shame" through Rome in Italy on 27 October.

To protest that China and Hong Kong universities will destroy and remove the memorial of the Tiananmen Square massacre June 4. 1989, from its campus - that is the only memorial on Chinese soil about the massacre.

They have landed the large copper sculpture by the artist Jens Galschiøt. Art employees from Galschiøt's workshop have driven a truck 2000 km from Denmark, through half of Europe so that it can participate in the G20 meeting in Rome.

They will use the sculpture to focus on the situation in both Hong Kong and China.

The summit has not yet started and the protests have already sounded! Luo Guancong, a democracy activist in Hong Kong in exile in Britain, gave a speech in front of the Chinese Embassy in Italy.

Rome, where the G20 summit was held from October 30 to 31, became a gathering center for protesters from all over the world who protested against the Chinese government.

The China Policy Transnational Parliamentary Union plans to organize large-scale demonstrations and protests in Italy during the Rome summit.

The summit has not yet started, and the protests have already sounded! Luo Guancong, a Hong Kong pro-democracy activist in exile in Britain, delivered a speech in front of the Chinese Embassy in Italy.

Happenings / exhibitions with the pillar of shame