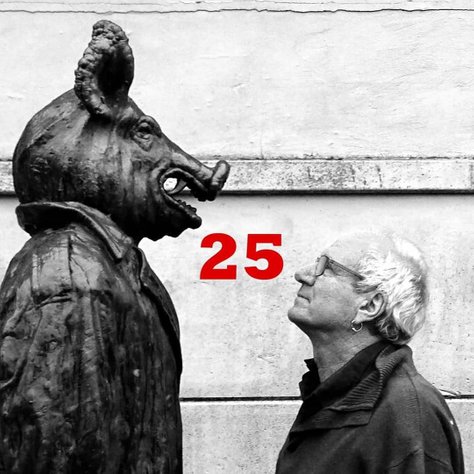 Jens Galschiøt, with his sculpture "My Inner Beast" 1993

Jens Galschiøt was born in 1954, in Frederikssund Denmark. He is married and has three children. He is certified construction blacksmith and self-taught silversmith and sculptor. Galschiot settled in Odense in 1973 and opened his 2000 m2 studio in 1985, which contains a bronze foundry, a workshop, a gallery, and a sculpture park.

Internationally, Galschiot could be characterized as one of the most significant Danish artists of late modernity (after 1980). His artistic output covers a wide field of expression; from jewelry and small fine figures to giant, politically charged sculptures. He is among the best known Danish artists abroad. His reputation extends from Hong Kong and Mexico, through to Germany, Spain, and the United States Apart from clothing sculptures Jens Galschiøt creates international happenings to highlight the current imbalance in the world.

Jens Galschiøt is the founder of the organizatio Aidoh (Art In Defence Of Humanism).