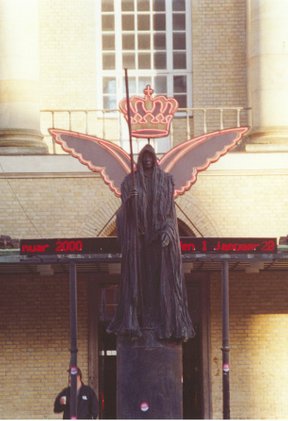 The Messenger by Jens Galschiøt

The Messenger is a 5 meter tall bronze sculpture, created by Jens Galschiøt

It was first inaugurated on the 29 February, 2000, in the central square of Kongens Nytorv in Copenhagen. The sculpture was made as a plea to the worldwide Jubilee 2000 campaign in favor of cancelling the world’s poorest countries’ hopeless debts.

The sculpture is a monument and a symbol of a Messenger from the South. An archetypal woman with Masai-like stature equipped with cloak and staff. She is placed on a cylinder with engravings similar to rock carvings.

Two digital displays show the flow of money from North to South and vice versa.

Contrary to popular belief, the South-to-North flow is dominant: for each dollar transferred from North to South 12 dollars flow back the opposite way. This is based on data from the World Bank.

See more about the sculpture here.