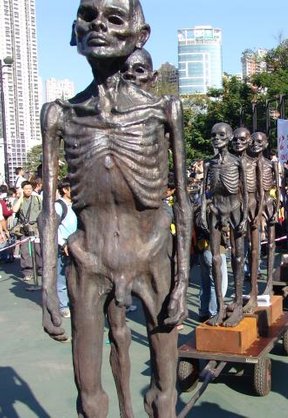 The Hunger March by Jens Galschiøt

The Hunger March is a series of sculptures depicting a starving boy, was launched as a protest against cuts in development aid. Cuts are a fatal mistake at a time when the gap between rich and poor is growing, where over a billion people are living below the hunger threshold, and where poverty and hunger are the main cause of conflicts and refugee flows worldwide.

In the summer of 2002, a crowd of 27 starving African boys cast in copper started a tour throughout the country to protest the government’s cutbacks of developmental aid. Jens Galschiøt launched the initiative in cooperation with the NGO Forum in Aarhus. Hundreds of volunteers took part in the creation of the sculptures in the artist’s workshop, and subsequently in the mobilisation of the boys all over the country.

The event takes inspiration from the 1980s movie ‘The March’,  in which a horde of starving people march towards the door of Europe’s elite. They are compelled by the desire that despite the privileged class’s best attempts to neglect them while they live they at least be forced to watch them die.

The Hunger March is a reminder that if the world’s needs and distresses are not relieved, its desperate victims will some day be knocking at our door.