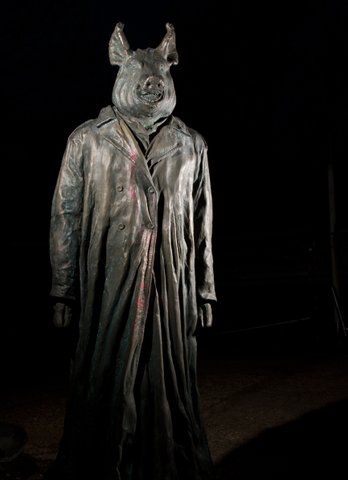 My Inner Beast is a series of 22 tons of heavy black concrete sculptures, created by the Danish sculptor Jens Galschiøt in November 1993. Twenty sculptures were erected in twenty cities in Europe, without permission from the authorities

The sculptures depict and pig in human clothing, the purpose was in an unconventional way to focus on the rising violence, intolerance, racism and persecution of minorities to which Europe has been shown in recent years.

In November 1993, the twenty sculptures were installed in a span of 55 hours without the knowledge of the authorities. The sculptures created commotion and spurred debate in the press, and inside circles both public and political. In several locations the sculptures have found a permanent place as a gift to each city. More than 100 volunteers contributed to the happening.