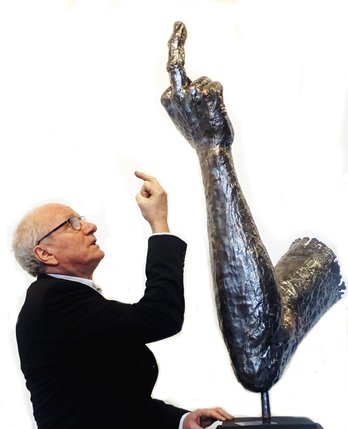 The Fuck double standards is a sculptural commentary on the politicians who have cut billions from development aid over the years, while boasting that we raise millions for the same purpose. The sculpture was sold by the Danish collection at auction, for the benefit of the world's poor.

the sculpture went to Morten Huse Eikrem-Jeppesen, founder and director of pressconnect.dk.

The purpose of the project is to use the fundraiser to confront the policies with the cuts that sections of the population believe are offset by national fundraising and private initiatives. The aim was for the project to be discussed and debated in the media and thus (ironically) attains an iconic status in the Danish collection which can sell it at a high price for the benefit of the world's poor. 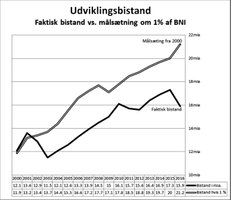 Is Danish Colletion a bad idéa?

Galschiøt: No, it is excellent to collect money for the world's poorest, for the same reason I have made and donated the sculpture for the collection. But when politicians say every penny counts, it is also important that we question why we then reduce development aid by more than 5 billion compared to the percentage level in the year 2000. That is 50 times more than we collect for the Danish collection.

But the figures show that development aid has increased!

Galschiot: Yes, because Denmark's prosperity has increased. But we give an ever smaller share of our profits to the world's poor. So while the Danes have got more money in their hands, we have chosen to reduce foreign aid from 1% to 0.75% of our GNI.

Who has prepared the development figures?

It is the journalist and development expert Knud Vilby, former chairman of the Intergovernmental Co-operation and the current chairman of the rights organization IWGIA that has compiled the figures.

Where do the development figures come from?
The figures are Danida and the Ministry of Foreign Affairs' official figures.

Notes on the development figures:

*Note: We have chosen to use Danida's development figures which vary slightly from the OECD figures.