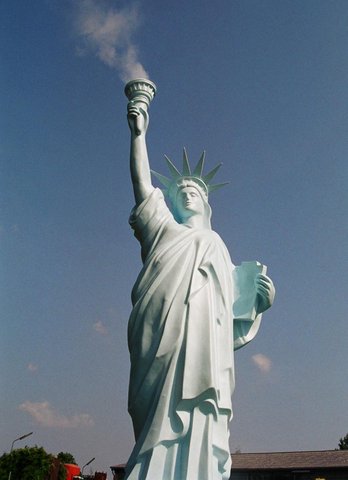 Freedom to Pollute by Jens Galschiøt

Freedom to Pollute is a 6-foot-high fiberglass copy of the American Statue of Liberty with smoke coming out of the torch. The sculpture was made and erected in the year 2002.

The sculpture has been set up during several climate conferences and demonstrations.

The Statue of Liberty symbolizes the United States. By using this particular sculpture as the object of pollution, the thoughts are led to the United States' unprecedented role in the international climate negotiations. Here, as in other contexts, the superpower refuses to enter into binding agreements that are necessary for the construction of an international legal order. As George Bush the Elder put it: The American way of life is not up for debate.

The Statue of Liberty represents the American dream that is about the total freedom of the individual citizen. By putting this positive symbol of freedom together with the negative concept of pollution, a short circuit is created that visualizes the unsustainable situation. The freedom of the one limits the freedom of the other and threatens the life of others.

The sculpture is both powerful and arrogant when it just stands there and smokes smoke with its message of claiming the right to pollute. It symbolizes the strong man's right to set his own conditions without regard to others.