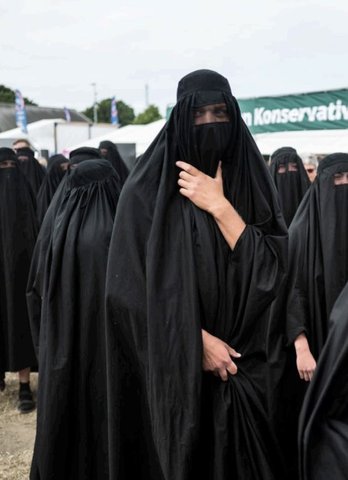 In English:
About the Happening
Artist Jens Galschiots view on Burkas

In connection with the burka ban in Denmark that became illegal in 2018, Galschiot made a series of happenings during the meeting, challenging the legal regulations surrounding clothing, by wearing both burka and being naked during the burka.

Fuck Too Little And Too Much - An art event about banning Jens Galschiøt.

Danes are increasingly deprived of personal rights, and legislation is often symbolic and lacks logical or professional basis.

The latest bill is the ban on burqas that are intended to empower and free the poor oppressed women during the costume. Apparently no one has read the 2009 repport commissioned by Liberal government party itself, which states that the vast majority of Burka dressed in Denmark are wearing the costume against their husbands' will, that they cannot receive social benefits and that approx. half are ethnic Danish converts.

One must not be naked! It's too little. Do not wear burka! It is too much. What if you are naked under a burka?

At this year's peoples summit, we bring 15 burkas and people can come and exchange (everything!) Their clothes for one of the sold out suits.

The burqas are completely black with a small net to look at. They are made of one continuous piece of fabric, so you can't take off parts of the Burka to show your face.

If you are stopped by the police and asked to remove the burka or identify yourself, then you must dress completely naked

Due to the prohibitions against burkas, masks and abusive offenses are doubly illegal to the burkah. And since they have no other clothes on, they will have to go back through the crowd, either naked or wearing burka to get up to our tent and change clothes.

Of course, we have no idea how the police respond or whether they do at all. But it will in any case be interesting to see how people react when the crowd is overrun by people in burka. And the event becomes no less interesting when you lift up the burka and show your naked leg or a buttock.

Media and live streaming:
The burqas dressed are constantly being followed by a small 'camera team' that livestreams to facebook. That way the whole world can follow. And we bet that some will do! It is also very possible that journalists will follow along.

Organization:
In our tent in place D4 you can sign up for 'canned guards' of one to two hours. Either as a canner or 'camera team'. At the start of the guard, you put your clothes and your belongings in a box in the "dressing room" and get a burka. When the shift is done (or you have had enough) you return to the tent for dressing and debriefing where you tell how it went - preferably live to facebook.