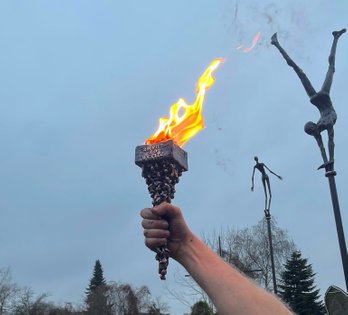 Photo can be used without copyright: Copper model of the Pillar of Shame can also be used as an Olympic torch for the Winter Olympics in China - 4 to 20 February 2022. Jens Galschiøt is holding the torch. 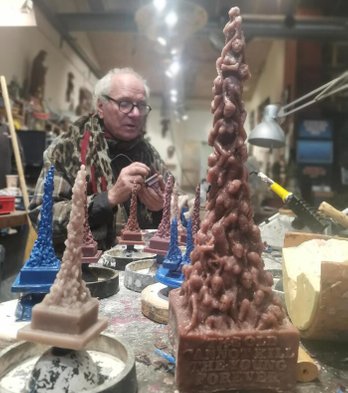 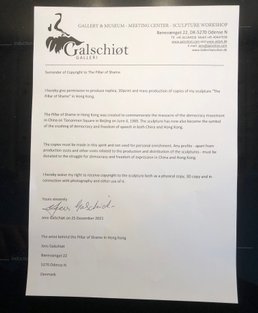 Document confirming the surrender of copyright for the pillar of shame

At the moment, many 3D printers are printing copies of the sculpture Pillar of Shame

Herewith a briefing about the situation with the Pillar of Shame

3D Print: A fantastic beautiful 3D scan of the Pillar of Shame in Hong Kong has been posted on the internet for free use see link.

At the moment, many 3D printers are printing copies of the sculpture. I regularly receive photos and emails from people who are working. These small copies are used as small memorials to the Tiananmen Square massacre 4 june 1989 and placed around as both exhibition objects but also as streetart figures.

3D Print it out and join the action and spread it on social media and other platforms.

Take photo of the sculpture located in all possible and impossible places, in front of the local Chinese Embassy, or in the local parliament,  on top of Mount Everest, on Mount Hong Kong, in Nepal, and New York.

You can put up copies of the sculpture at your school, university or workplace or around the city - only the imagination sets limits.

But be carefull - this is certainly not harmless art.

If you do not have access to a 3D printer, you can use this 3D photo that can be inserted into any photo that you take with your mobile. The effect can be seen from this link when you are logged in to Facebook and open it on your smartphone. Or through  Instagram on this link

So the paradox is that in an attempt to remove the monument in Hong Kong, a process has been initiated in which thousands of copies begin to spread all over the globe, keeping the memory of the Tiananmen Square massacre 4 June 1989 alive.