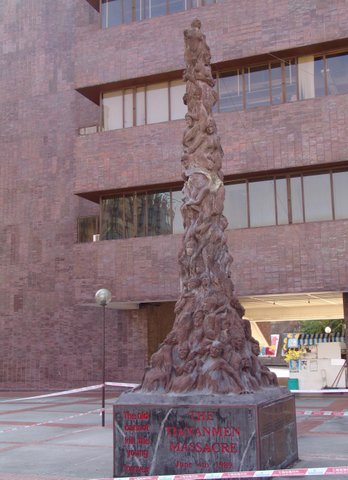 (This letter is Google translated and may therefore contain translation errors)

the words from the former Chairman of HKU Council Mr Arthur Li mentioning you and the pillar of shame which used to be at HKU. He decribed that the pillar of shame is a "scam" / "lie" that it was actually made by you for the Oklahoma City Bombing but not the Tiannanmen massacre. He also said that neither the US government nor other countries accepted the pillar of shame so you sent it to Hong Kong.

I strongly dissociate myself from what the former University of Hong Kong's council chairman Arthur Li is saying. It is strange and completely unacceptable to be called a liar by a man who advocates taking down works of art that try to remember and mark Chinese history.

It is Arthur Li who is trying to obliterate history and wants to oppress everyone who is in favor of citizens' free rights to debate, and to remember what is happening in Chinese society both now and in the past. It is a disgrace that the monument "The pillar and shame" has been removed with violence from Honkkong University and it is a disgrace that the university people can go in to wipe out history.

It's not me who's lying and manipulating the story, but perhaps Arthur Li is probably trying to create a breeding ground for a lie that the June 4, 1989 Tiananmen Square Massacre never took place.

I made created The Pillar of Shame in 1993 to 1995. It was my intention to create a monument that remembered various landmark crimes against humanity around the world. The same sculpture was to be erected in several different places in the world to mark these crimes.

Therefore, all the different peoples are represented the sculpture, Asians, Africans, European, indigenous peoples from the American continent ect, so that the same sculpture could mark different crime. Only the large shelf was very special for each country.

The sculpture was called "The Nobel Prize of Shame" by the press. And China received the first "award" for the Tiananmen Square Massacre in 1989.

It is a very important point and an artistic decision that the sculpture should be the same everywhere it should mark a crime, to emphasize that the essence of these crimes in the world is the same no matter where they took place

I decided that the first "pillar of shame" should be erected in Hong Kong in 1997, to mark the June 4 Tiananmen Square Massacre in 1989.

I presented it in Rome, Italy in 1995, during a major international meeting. I got a lot of suggestions on where to put up a copy of The Pillar of Shame. But I chose the first one to be erected in Hong Kong in 1997 and I made a special copy and a special plinth for Hong Kong.

Some years after the year 2000, I set up a "Pillar of Shame" in Mexico to mark the killing of the indigenous people and in 2001, I set up another one in Brazil to mark the massacre of the landless peasants and the struggle for land in Brazil. It is still my intention that I will line up more in the world.

The pillar of shame in Hong Kong, is the most important of these sculptures, as it was the first to be erected and it has formed a school for the 2 other "Pillar of Shame" "in the world.