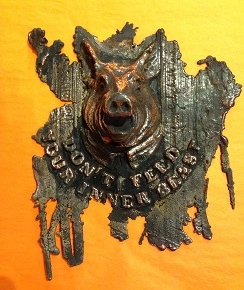 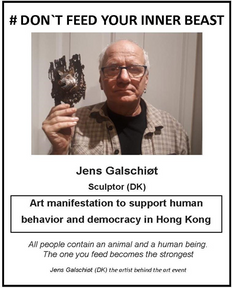 #DONTFEEDYOURINNERBEAST is an art happening that is a mix of art and social media. The sculptures, which consist of copper masks representing the pig's head, have been hung around the world. Artists and activists have then been encouraged to take pictures of themselves and the mask and tag it during #DONTFEEDYOURINNERBEAST, to support the claim against police violence and the demand for a free democracy that can contain activism.

The “My Inner Beast” art happening started in 1993 and is one of the biggest street art happening in Europe. 25 beasts, each 1 ton of weight were placed (illegally) in public places in 10 countries and warned Europe that the inner beast would again become a major player in European politics.

In connection with the 25th anniversary of the art event, the artist, Jens Galschiøt, revitalized his old art project, this time with small unique copper masks of the head of the beast with the text “DON`T FEED YOUR INNER BEAST”. The happening started up in Kassel in Germany during the 2017 Dokumenta14 art exhibition and the masks have since then been put up all over the world, in ministerial accounts, newspaper offices, NGO places, with activists, artists, exhibition venues and in slums, on castles and walls in many cities.

In support of the Democracy movement in Hong Kong, hundreds of street art copper masks have already been shipped to Hong Kong. In the near future, they will be put up and distributed among activists and artists in the city with a call to use the art objects actively and creatively to support the demand against police violence and for democracy and the release of the imprisoned activists.

In connection with the art manifestation in Hong Kong, Galschiøt lets the event go viral. He encourages leading artists, cultural people, politicians and others to take a photo of themselves (and others) with the sculpture and at the same time share it on social media with the hashtag #dontfeedyourinnerbeast, thus supporting the message of deselection of the Beast and the choice of humanistic behaviour and democracy in Hong Kong.

A special filter has been made on Facebook and Instagram with both sculpture and text, and where you can insert your photo and thus participate in the art project without having the physical sculpture. He also encourages other artists to use their creativity and post the photo on #DON’TFEEDYOURINNERBEAST.

2019 is the year of the pig (or the beast) in China, so it might explain the behaviour of the policemen in Hong Kong…

Jens Galschiøt using the Facebook frame.Artist Kacey Wong with one of the sculptures.